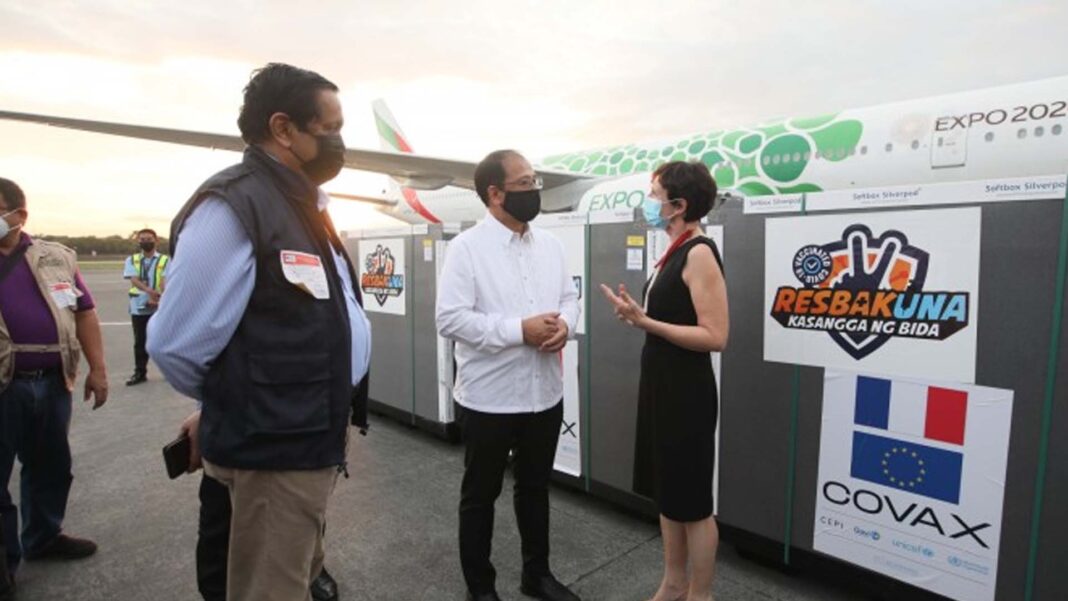 A total of 1,632,900 doses of the AstraZeneca vaccine arrived on Wednesday, the first batch of a multi-million Covid-19 vaccine donation by France through the COVAX Facility to the Philippines.

During the arrival of the vaccine doses at the Ninoy Aquino International Airport (NAIA) Terminal 3, French Ambassador to the Philippines Michèle Boccoz said the doses are part of a donation that would eventually total to 5,850,000 doses of different vaccine brands.

She lauded the COVAX Facility, the World Health Organization, the United Nations Children Fund (UNICEF), and the European Union for their work in “saving people the world over and contributing to fighting the disease in an efficient manner, trying to prevent the emergence of new variance.”

On the other hand, National Task Force Against Covid-19 chief implementer and vaccine czar Secretary Carlito Galvez Jr. thanked France “for their act of compassion,” noting that the first batch will help more than 800,000 individuals.

In total, he said vaccine donations through the COVAX, the WHO, Gavi and the vaccine alliance would amount to 39 million doses.

To date, he said the country has received more than 48 million donated vaccine doses.

He also thanked the UNICEF for helping with the logistics of the vaccine doses and for their assistance in procuring syringes in the midst of a “global acute shortage”.

To ensure the protection of the Filipino people, he promised to vaccinate three million more senior citizens and those with comorbidities as part of the government’s vaccination drive.

“And we will also promise that we will also care for the poor, those people who are very vulnerable,” Galvez said.

He noted that the government’s vaccination program—through the efforts of local government units, the private sector, and national government agencies—will “continue the momentum until such time that we can reach to the farthest, most geographically challenged areas in the whole Philippine archipelago.” (PNA)