The city government has set all Thursdays of July as cleanup days throughout the city against the increasing cases of dengue. 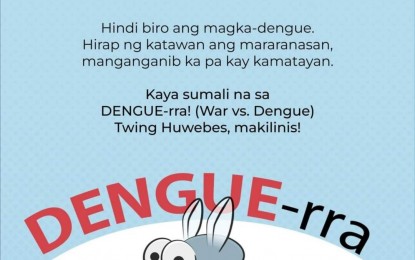 “This does not prevent anybody from doing it everyday to assure that they do not have dengue-carrying mosquitoes or any mosquito breeding near their residences,” she said.

She also urged residents to do “Oplan Taob” by looking for any containers with stagnant water and turning them over to prevent them from becoming mosquito breeding sites.

She said the city government is heightening its activities against dengue as health service records show that the number of barangays with a clustered incidence of dengue has doubled from the previous week’s 13.

“The city is serious in combating dengue which is now a health threat,” she said, adding that the cases have reached an epidemic level.

She said the anti-dengue campaign will be assessed for a possible extension if necessary. (PNA)

Every Man Who Has Loved “Emily In Paris”

Bed Weather: Here’s How You Can Stay Productive During Rainy Days

Sen. Grace Poe asked the entire government to "think outside the cubicle" this is to allow modern technologies for hybrid work arrangements in the country to thrive.
Motoring

The Department of Budget and Management has approved of the 1.4 billion pesos of additional funds to extended the free bus rides at EDSA Carousel.
Luzon

Some students in Southern Leyte are having their class in tents while their classrooms are being repaired.
Local News

Since home quarantine is already allowed, the Department of Health no longer supports the use of schools as isolation facilities for Covid-19 cases.
Load more